Nike is continuing to utilize the “What The” theme but rather than save it for a release late in the life of a signature shoe, the LeBron 16 sees it at the forefront of the product’s cycle. Dubbed the Nike LeBron 16 “1 Thru 5,” the mismatched pair releases Saturday, Sept. 15 on the SNKRS app and select retailers.

The version is the second release of James’ newest signature shoe. Though the first was a collaboration with designers from Harlem Fashion World and a women’s-only pair.

The “1 Thru 5” model pays homage to James’ versatility that allows for him to effectively play all five positions on the court. The blend of wild patterns and colors purportedly is a combination of the first wave of releases the LeBron 16 will see.

The left shoe is comprised of rainbow-like Battleknit 2.0, which is technology Nike is using the LeBron 16 to introduce. Meanwhile, the right shoe has a more subdued color for its upper, but is accompanied by a cheetah-print tongue.

Other elements that have been seen on various versions of LeBron 16 leaked images are also featured on the “1 Thru 5” pair, such as an embossed lion’s head on the heel of the right shoe. However, the back of the left shoe swaps out the image in favor of James’ signature logo and “sixteen.” 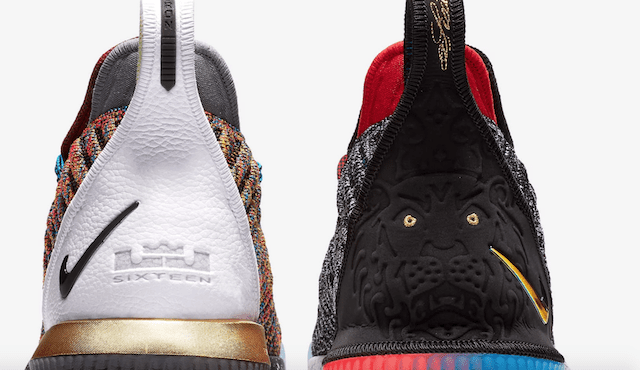 Coinciding with the release, Foot Locker is partnering with NBA 2K19 to offer fans a special opportunity at their Hollywood and Highland location in Los Angeles.

Considering the NBA has removed restrictions on player footwear for all games this season, it’s reasonable to suspect James may at some point break out what should be the most expressive colorway of the LeBron 16 line. 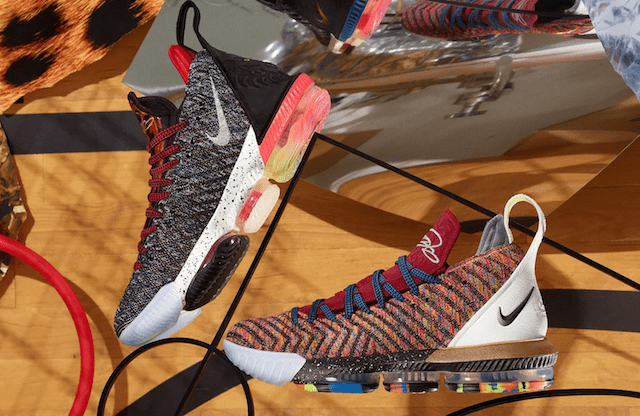 How the Lakers got their starting lineup together for Christmas